Montessori Cosmic Education: Must You Follow a Set Curriculum and Have Shelves of Materials? PART 2

“We can make the human race better by assisting the child in building his character and acquiring his moral freedom.

One of the means to this end is a cosmic education, which gives the child an orientation and a guidance in life. For this education wants to prepare the growing child for the task awaiting him in adult life, so that he will feel at ease in his own environment, in which he will later have to live as an independent being.” 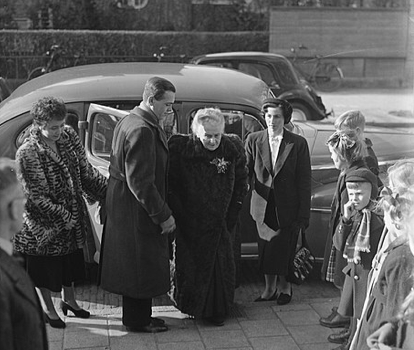 Montessori wrote often and ardently about the need for an education that would be an aid to life.  Her entire life’s work focused on developing an approach to working with children that was less about “educating” than to learning from them so well-meaning adults wouldn’t get in the way of their natural growth into adulthood.

By the later years of her life, especially during the period of exile in India, Montessori referred to this approach as cosmic education.

What really IS Cosmic Education?

Perhaps it is because Dr. Montessori used the term in widely different contexts that the definition of cosmic education can be a little tough to pin down. Ask any Montessorian; likely all will know “cosmic education”, acknowledge it as a concept unique to Montessori pedagogy, and speak about it with conviction.  Yet, surprisingly, you’ll get a variety of responses:

In this quote from the unpublished proceedings of the International Montessori Congress held in Amsterdam, April, 1950, we get one of Montessori’s descriptions:

“Thus the way leads from the whole via the parts back to the whole. In this way the child learns to appreciate the unity and regularity of cosmic events. When this vision is opened up he will be fascinated to such an extent that he will value the cosmic laws and their correlation more than any simple fact. Thus the child will develop a kind of philosophy, which teaches him the unity of the universe. This the very thing to organize his intelligence and to give him a better insight into his own place and task in the world, at the same time presenting a chance for the development of his creative energy.”

On Cosmic Curriculum and Materials

In David Kahn’s interviews with Ms. Lena Wikramaratne and Mario Montessori, Sr. there is much discussion about this big cosmic vision and how to impart it to the children. Both Mario and Ms. Lena talk about how they spent days in nature, discovering the plants and animals, building models and terrariums for closer study, all before the creation of actual materials. Mr. Kahn reflects with Mario on the current practice of providing materials before experience:

MONTESSORI: We tried then to work with the child in nature, to show the erosion of land, the sedimentary formation—we would try to help the imagination of the child with real experiences. If you take all the charts and timelines and call it Cosmic Education, that is ridiculous. It goes much further than that.

“﻿We must study the correlation between life and its environment. In nature everything correlates. This is the method of nature. Nature is not concerned with the conservation of individual life: it is a harmony, a plan of construction. Everything fits into the plan: winds, rocks, earth, water, plants, man, etc.”

This sounds like an endless curriculum to follow; a bottomless pit of topics to cover or information to provide. So wouldn’t a set curriculum be helpful, especially to those of us who aren’t steeped in the natural sciences? Mario gives further instruction on this point:

MONTESSORI: Well, they do get an illustration of the facts (referring to teachers in Montessori training), and if they don’t have this kind of sentiment, they should develop them with the children and through the children, using real natural materials. People always say that nature education is too expensive or that it would frighten the children. But when we worked with the children, we simply showed them what’s there. You could always demonstrate and give proof to the children as to what’s happening. For instance, I would build a sandbox. If you wet sand, it stands up. If it is contained by a cylinder, it pushes together. When you take the sides of the cylinder off, it pushes together. Then you sprinkle the sand with water, and the sand crumbles. All that took place on the earth, in the oceans. There are certain things that stay up for a long time—those are the mountains. Their material is hardened. Even then some mountains were washed away. I used to build extensive models outdoors, using natural materials.

Must You Follow a Set Curriculum and Have Shelves of Materials? 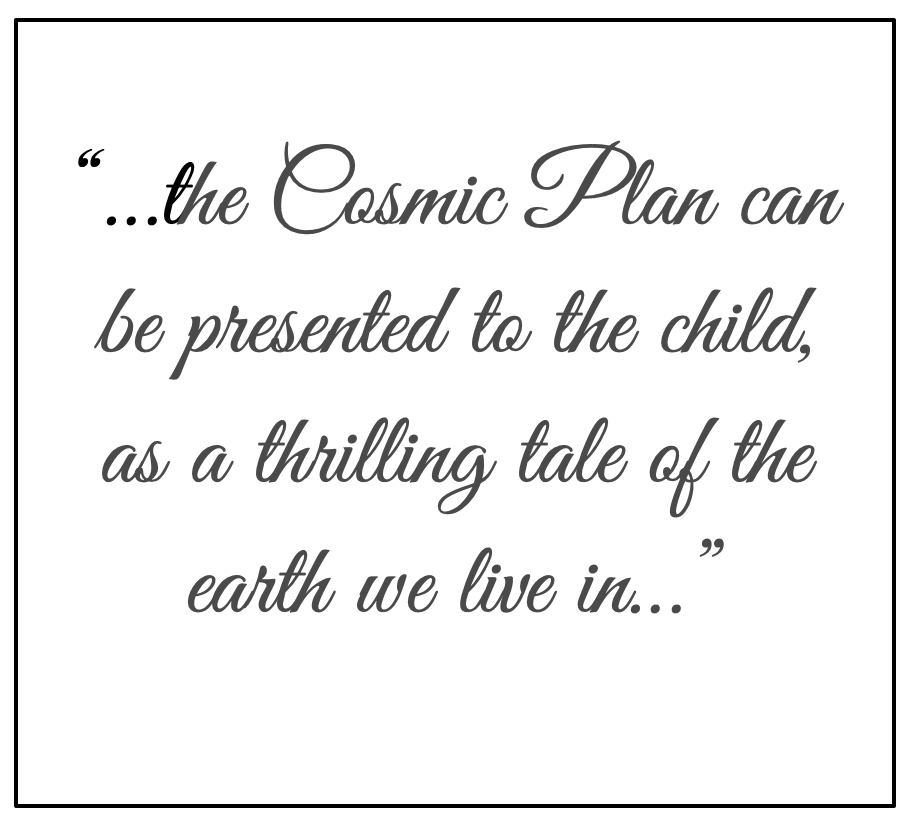 When Mario says “they should develop them with the children”, the them are all the lessons that may have been given to you in your training or that exist in your albums. I think he’s saying that you don’t need to know everything (in fact, you can’t) and you don’t need to have a strictly planned progression to follow. You just need to be curious and learn right along with the children.

So what about all those albums filled with lessons and the recommended progressions? Let’s think about it in big picture terms. In To Educate the Human Potential (pg. 2), Dr. Montessori says this: “…the Cosmic Plan can be presented to the child, as a thrilling tale of the earth we live in…”

I ask you, “What’s so thrilling about a series of carefully executed lessons that are delivered day after day according to a plan that doesn’t take into account the interests, wonderment, curiosities, and passions of the children?”

Yes, when I was teaching, I had general plans for each year and those albums were my library of ideas. But they were not generally my lockstep through the curriculum. How’d I manage then?

I’d start by thinking about the children who were going to join me and what I already knew about their interests. Then, based on those interests, I’d think about the hooks I’d use to inspire wonder and engage their curiosity. Next, I’d look for the connections that exist in nature to help tie it all together into a Cosmic vision…a mindset that would plant the seeds of belonging to the whole and feeling a potential purpose.

Finally, I’d begin to pull together the first lessons. It could be one of the Great Lessons or Key Lessons. Then I’d consider the academic skills the children would need to embrace their studies. That’s when I’d make decisions about what materials would enhance the students’ independence and encourage ongoing motivation.

My shelves would consist of a few “start-up” materials that I’d use to observe how the children would approach their learning. There’d be a few language-centered activities to support not only learning the associated vocabulary, but also to help with word-level reading skills, focused grammar box material for sentence level reading, and a couple sets of three- or four-part cards for paragraph reading experience and research.

I’d have a row of books with guidance/command cards that students would use to connect to the reading, with encouragement to do this work with a partner. This acknowledged their social nature, encouraged collaborative learning, and gave added support to develop independent learning. I’d include “maker spaces” where materials for experiments could be had and children could design projects.

Yes, I had areas of the classroom with traditional Montessori, skill-focused materials: math and geometry shelves, language shelves for grammar, and the supply shelves with learning tools. I might have a few specialized materials that could be pulled out any time by any child, like this learning tower of the timeline of life based on the booklets my husband and I have written and filled with activities to spark the imagination and guide deeper investigation.

But I found that I didn’t need every possible material. In fact, I think that all the materials, while enticing, actually work against the vision of cosmic education that Dr. Montessori believed was possible.  This little interchange with David Kahn and Ms. Lena not only promotes making materials on an “as needed” basis but insists that is preferable to teaching already-made materials:

WIKRAMARATNE: So I went to Dr. Montessori: What do we do with these older children? I won’t have books to teach them. She said, “You have the best book, the book of the world, which is the book of nature. Don’t worry, take them. You can find English material. English is fine for doing reading, writing and all kinds of literature.

And a little further on in the interview (which you really should look up and read in its entirely) Ms. Lena says this: 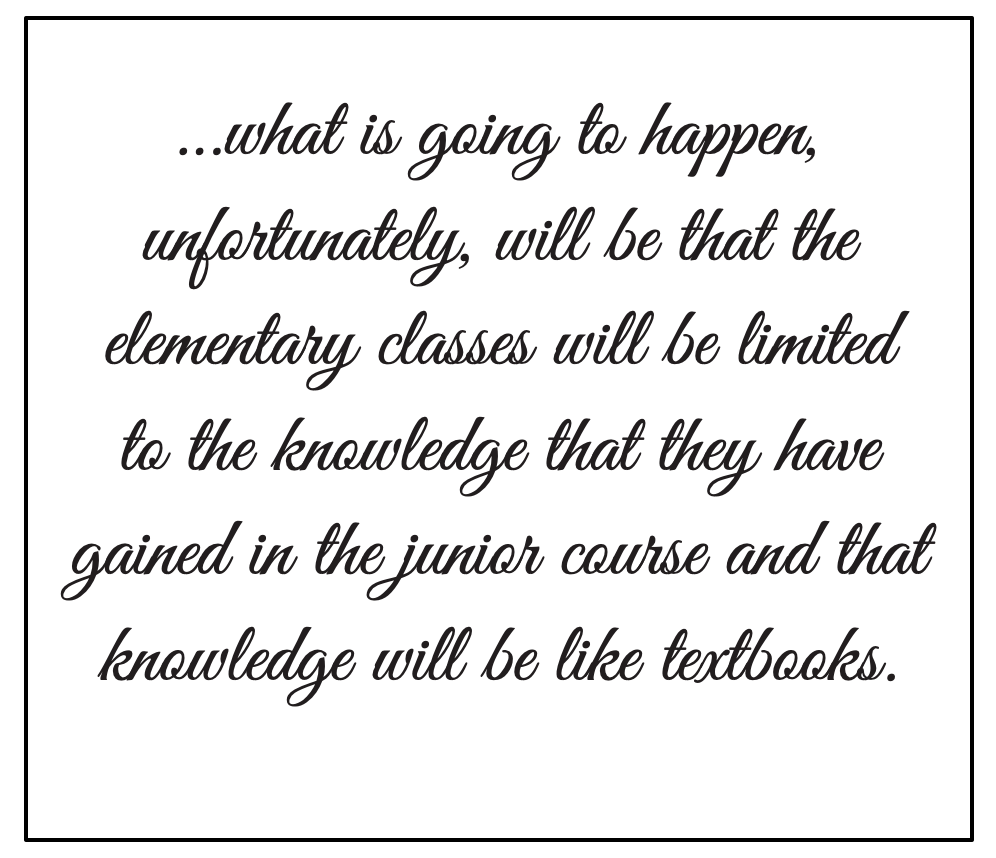 KAHN: So you were making real materials and creating real experiences in nature. This is somewhat of a contrast to the approach to Cosmic Education in our present training. We were not trained in this manner.

WIKRAMARATNE: Yes, it is wrong the way the natural sciences are given in training now. I have to say it: Because of what trainees are getting in how to present classified terms to the child. But they themselves do not know that much about nature. They must go out into the natural world or else they won’t be able to show anything to the child. And that’s where it begins.

KAHN: Then they really don’t have enough experience. So the children learn the classifications before they learn the lore and the common names.

WIKRAMARATNE: This is unfortunate. The orientation of the world must come first before you begin to classify. So what is going to happen, unfortunately, will be that the elementary classes will be limited to the knowledge that they have gained in the junior course and that knowledge will be like textbooks.

No you don’t have to make everything on the spot. I’d keep previously made materials organized and labeled in my storage area so I could make note of a child’s interest or question and be able to respond with, “I have something special just for you…” Then off I’d go to pull out that material, give a quick lesson on its use, discuss what might be learned from it and help the student make a plan for how they’d let me know what they discovered.

But if I found that a student would benefit from a new material or something I didn’t have, my series of templates allowed me to quickly create and print a “Goldilocks material”* almost on the spot.

Putting It All Together

With these descriptions, you can see that I didn’t treat the contents of my albums like a scope and sequence or series of not-to-be-missed lessons. I chose based on the students’ interests and desires. Materials were pulled from storage or made as needed for giving an impressionistic introduction. Often the follow-up was materials made by the children so they could share their learning with others.

My focus was primarily on three goals: first, keeping the curiosity alive while secondly connecting their many interests to developing skills in reading, math and writing. My third goal, the most important, was for the children to be alive with their sense awe and wonder for the amazing world in which we live, so that the seeds that were planted would spout, take root, rise up a blossom into whatever place their cosmic adventure takes them.

*Goldilocks material: a material that is “just right” for the student’s need in the moment