Taking Task Cards to Task:
Could They Lead to Normalization?

Normalization has been elusive this fall. Teachers and parents lament the levels of unrest, lack of engagement, and, in some cases, downright unruly behaviors that are reaching epidemic proportions. Likely this is the result of the unnatural life we’ve all led the last two years and the emotional toll that the disruption to our normal lives is still taking.

Yet this is our current reality, and if we are going to help our children return to “normal” it is up to us to figure out by what means. If we believe Dr. Montessori’s words above, then helping our children become engaged in work should do the trick.

This is where things begin to get muddy: What if the children won’t work? What if they are not engaged? What then?

I witnessed a conversation about Task Cards, or as some call them Command Cards, that took place in one of my online groups. Task cards seemed to inspire a “Love Them” or “Leave Them” response from the participants in the conversation, with some guides finding them to be the key to independent learning, while others were saying that command cards led the student down a specified path, taking away true independent learning and development of creative thought.

I left the online “conversation” about Task Cards wondering less about Yay or Nay, than about how a guide goes about making a decision whether to use them or not.

First I thought back to my very first Montessori classroom. This well-appointed room came with a few math task cards for the various skill areas to be mastered while in the class. There definitely were no boxes and boxes of cards that graced my shelves in later years...more on those later. No, just 3 or 4 follow-up problems of increasing challenge, with answers on the backs, so that after the lesson, students did one or two problems as their daily math work to continue honing their skills. 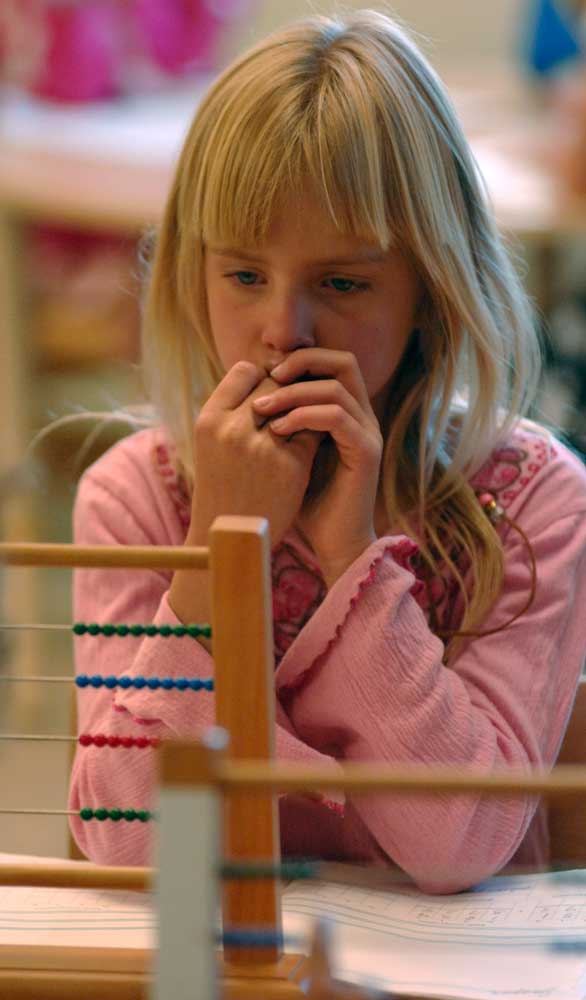 My recollection was that often the problems required teacher guidance. Students would set about trying the next card in the drawer, a problem that offered a slightly more challenging detail, and it was up to the student to sort out how to solve it on their own. Students often came to me for support, but many did not. Answers on the back helped the student check their work and regular quizzes allowed both the student and me to assess the level of genuine mastery. These task cards really helped the student progress independently and I always had a pretty good connection going with the student as initiated by them or by me when I took a look at their math notebook. Those conversations were the opportunity for me to pique their curiosity and inspire them to look at the problem in some different way that inspired them to keep after it.

Then I remembered the task cards that took up entire shelves in my later classes. How did the students interact with these cards? While these cards seemed like they took my students through a broader math curriculum, I also remembered that many of my students didn’t like them very much. For some, it was just a chore to complete each day; for others it was a game to see if they could jump around and skip from one section to another, possibly in an attempt to baffle the teacher, but also possibly because the number of cards made it truly difficult to keep one’s place. Those cards didn’t really didn’t connect well to the lessons, especially without a lot of personalization and teacher direction... and my students were not as engaged with them. There were too many problems on each cards, the problems progressed so gradually they were tedious, and the children seemed to look at all those boxes and just feel overwhelmed.

I felt that right in my own classroom experience I could see both sides of the Task Card issue. But I was still wondering whether the problem was the task card themselves, or possibly something else.

I watched a recommended short video of Kay Baker discussing what she had learned in her work translating PsychoGeometry into English. (https://vimeo.com/79808065) The part that landed most with me was the idea that when offering area lessons, Dr. Montessori suggested first showing the rectangle as the baseline, then demonstrating the calculations for the area of a triangle and then simply encouraging the children to figure out the areas of the remaining polygons on their own, clearly posing that as a problem to be solved, rather than assigning a series of cards that would “task” the student with each of the shapes. I imagined that had my students fully explored the equivalence materials as a prelude, that they could have sorted out methods of finding those areas that would lead to the discovery of the formulae...all without the use of task cards.

But then I wondered, would they have done this work on their own? Would they need an assignment in order to make sure they followed through? What sort of encouragement or excitement could be generated that would make sure the students at least grappled with those area formulae? And if I had to make sure my students could calculate the area of pentagons for their standardized test, was that something I was comfortable leaving to chance?

I began to wonder about the difference in Dr. Montessori’s goals for education and those of our state education systems. Perhaps this was where the problem with task cards had its roots: a conflict of objectives.

When I looked back at the discussion it really seemed to boil down to the expectations being placed on the teacher to make sure the student would demonstrate a specified level of mastery on a standardized test.

I turned to a portion of Psychogeometry next. You can read the whole text here, but these words inspired further thought:

“We began by saying that the process we are describing does not relate to the systematic study of geometry. It is nothing more than mental exercises relative to geometry."

It prepares the mind to act rather than receive, and arouses interest that is always refreshing. The prepared mind is thus made active, and when it is time to receive true systematic geometry teaching (at secondary schools), the pupil will resemble an intelligence that meets the teaching halfway with great interest and with an amazing capacity for understanding. He may perhaps give much, rather than take much. This will also produce future benefits for science.

There is only one way, in my opinion, to make a decision about task cards: experiment and observe.

Always back to observation and understanding the children. Observation really is the place to begin. You can start by sharing just a few task cards, offering them as a jumping off place and a way to get started. Maybe your task cards would give some hints about how to go about researching the problem at hand, rather than just giving a problem to solve or a task to complete. Maybe the cards would offer some choices of practical application of the concepts you hope for you students to master, with the opportunity to pick just one that appeals.

Regardless of how you give task cards a try, you’ll want to make sure that your main reason for doing so is not so much about covering academic territory, but rather engaging students in a process that will develop their thinking and their concentration.

You’ll watch your students. You’ll talk with them. You’ll get to know their hopes and dreams, their passions and their fears. Once obtained, you can use this knowledge to develop playful, fun, and mysterious opportunities to connect students to excited learning and purposeful work.  Whether it be through a few carefully created and monitored task cards, or simply a verbal suggestion that inspires your students to an investigation, your observations will guide you to an informed decision about what actually works as an aid to concentration and normalization.

Before you know it, your students will be showing you exactly what they need to get back to the regular hum of the typical Montessori learning space and you’ll be equipped excitement, engagement and wonder!